An osteotomy is a surgical procedure to realign a bone in order to change the biomechanics of a joint and the force transmission through a joint. These procedures must be performed with an extremely high accuracy level, not only to create the desired geometries but also to provide biological environments for rapid and effective healing. In particular, the High Tibial Osteotomy  is a corrective surgical procedure in which the upper part of the tibia is resected so that the lower limb can be realigned. The most common form of High Tibial Osteotomy is the closing wedge osteotomy, in which the realignment is achieved by removing a lateral wedge of bone from the proximal tibia. Open wedge High Tibial Osteotomies are also well-established and commonly used in patients with varus malalignment and medial compartment osteoarthritis.

The main difficulty with High Tibial Osteotomy is that the outcome is not predictable, and the principal suspected reason for the unpredictability in patients who meet the indications is that it is difficult to attain the desired correction angle. Numerous long-term clinical studies have shown that osteotomy results are improved if the femoral-tibial alignment angle is between 7º and 13º of valgus alignment.

Knowledge of deformity analysis is mandatory to prepare for limb realignment surgery. Nowadays, radiology departments are almost fully digitized and picture archiving, and PACS are in widespread use. Accuracy of measurements has improved with the introduction of computer-assisted limb geometry measurements as compared to previously used plain radiographs.

Surgeons currently need to master limb geometry measurements and osteotomy planning on digital X-rays. To assist surgeon on this digital approach, a pre-operative planning software is a precious tool. 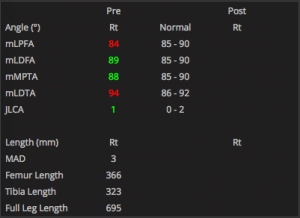 The major contribution of computer-assisted surgery to High Tibial Osteotomy has been, so far, in preoperative planning, whereby the surgeon is provided with a prediction of postoperative alignment or loading.

Such computer systems are easy to use. PeekMed software has proved to be particularly intuitive, mainly thanks to its wide range of specific wizards and measurement tools, like the Limb Deformity Correction wizard or the High Tibial Osteotomy tool.

This tool measures the correction angle of an High Tibial Osteotomy, i.e. the angle between the line from the center of the femoral head to the point at 62% of the medial-lateral distance of the knee, towards lateral, and a line drawn from that point to the center of the tibiotalar joint. This approach uses the Dugdale technique. PeekMed provides a widget that helps to position the point into the right location. The circle should be placed on the head of the femur, the tibial tray in the midline and the distal line in the tibial plafond. By doing this, the widget automatically calculates the angle needed for the correction. The PeekMed system also allows the simulation of fixation hardware implantation and the actual osteotomy.

The goal is to reduce the incidence of the common postoperative problems. With PeekMed it is possible to greatly reduce the probability of incorrect valgus alignment, incorrect proximal / distal location of the osteotomy, inadvertent internal / external foot rotation, and violation of the joint with the fixation hardware. If proximal- fragment fracture is due to proximity of the osteotomy to the joint, especially because of inadvertent anterior / posterior sloping of the proximal resection, then the probability of fracture should be reduced.