Hip Arthroplasty Templating: Improve the Procedure with a Digital Approach 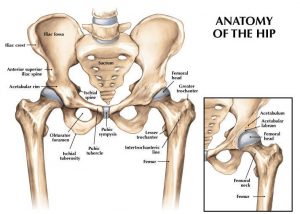 In the past decade, indications for hip replacements increased, according to the Agency for Healthcare Research and Quality. More than 300,000 total hip replacement surgeries are performed each year in the United States only, and patients’ expectations in terms of function and longevity have been growing. As improved implants technology addressed wear and fixation issues, more attention should be given to optimising hip biomechanics as it is essential to restore function. Pre-operative hip arthroplasty templating allows foreseeing the appropriate implant position and possible complications prior to surgery.

Conventionally, pre-operative planning for THA is performed by superposing acetate implant drawings on hip or AP pelvic radiographs. It is usually a mistaken belief that templating is only about assessing the size of the acetabular and femoral hip components before surgery. The main goal of hip templating is to estimate the position and insertion depth of both components and to anticipate potential difficulties to reproduce hip biomechanics.

Hip templating can only be accurate if the radiographic magnification factor is controlled. Controlling the source-film distance is easy but, because patients have different morphologies, it is not always simple to position the hips exactly at the same level between the source and the film. To be less dependent on an accurate radiographic set-up, calibration objects can be used. 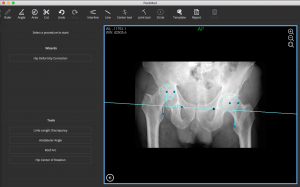 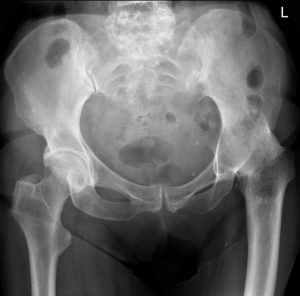 On the other hand, if pathology has deformed the acetabulum and/or the femoral head, the hip rotation centre may be difficult to find and its position may vary during hip movements. For this reason, it is easier and more useful to define the “original” femoral and the “original” acetabular rotation centres. These original rotation centres can be found as the centre of a circle fitted on the preserved part of the femoral head (generally the inferior 1/3) and the preserved part of the acetabulum (generally the teardrop and the medial wall). Fitting both rotation centres on each other, generally gives a good idea of how the hip joint must have looked like before deformation.

With PeekMed, these references are easily and accurately marked directly in the patient’s CT scan. 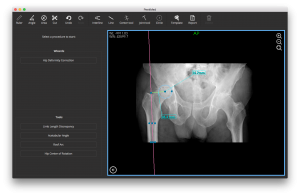 The femoral offset is defined as the shortest distance between the femoral rotation centre and the longitudinal axis of the proximal femur. The longitudinal axis can be found by drawing a line between the middle of the projected femoral canal, measured at two different levels in a part of the proximal femur that appears to be symmetrical. The femoral offset is important because it controls the tension and moment arm of the abductor muscles, the tension of the soft tissues, the wear of the acetabular component and the load imposed on both, the acetabular and femoral implants. Failure to restore the femoral offset may lead to excessive wear, limping and/or hip instability. On the other hand, excessive femoral offset has the potential to overload the femoral implant, to generate micromotion at the implant-bone interface and to cause pain in the abductor muscles and the region of the greater trochanter. 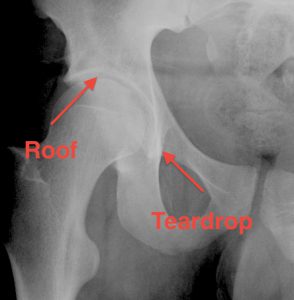 The combined offset can be defined as the sum of the femoral and acetabular offset.

This parameter is relevant for the tension of the abductor muscles and soft tissues, as it controls the relative position of the greater trochanter and the pelvis. On the other hand, it cannot be used to estimate the abductor muscle and body lever arms or the joint reaction forces, because it does not take into account the exact location of the hip rotation centre.

The leg length can be defined as the distance between a fixed reference point on the pelvis, e.g. the inferior tip of the teardrop, and the floor, with the distance being measured on a standing AP pelvic radiograph. 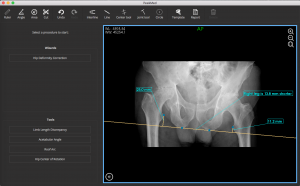 Because of bony abnormalities outside the hip joint or due to functional limitations Leg Length Discrepancy (LLD) does not necessarily reflect a lengthening or shortening at the level of the hip joint itself. As such, it can be relevant to compare leg length and hip length discrepancy. The hip length can be defined as the shortest distance between the inferior tip of the teardrop and a horizontal line through a fixed point The leg length can be defined as the distance between a fixed reference point on the pelvis, e.g. the inferior tip of the teardrop, and the floor, with the distance being measured on a standing AP pelvic radiograph.

Choice and positioning of the implants

In most cases the aim will be to restore the original hip anatomy and biomechanics. 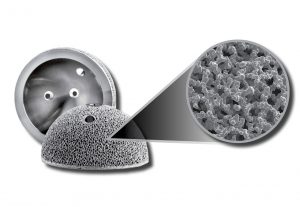 In a first step, the cup is chosen to fit the acetabular cavity and to restore the original acetabular rotation centre. The template of the acetabular component is positioned with an abduction angle of 40° to 45° between the longest axis of the cup and the inter teardrop line, depending on the bearings materials. 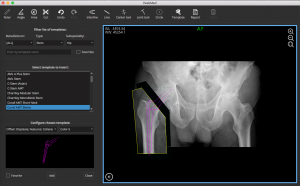 Second, a femoral implant is chosen to fit the medullary canal. The longitudinal axis of the implant is positioned parallel to the longitudinal axis of the femur and the approximate insertion depth is chosen in order to correctly restore the leg or hip length. Note that fine tuning to restore the offset and the original femoral rotation centre, can be done. A repeated “trial and error technique” allows selecting the correct stem size and type as well as the right neck-shaft angle and neck length.

Compensating for failure to restore the original hip anatomy 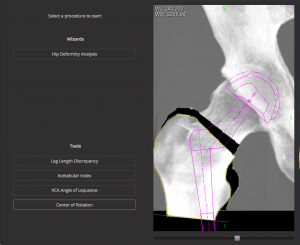 With the emergence of digital radiographic systems, templating is on its come-back. Hip arthroplasty templating allows assessing the reciprocal relation of the different anatomical landmarks, to evaluate hip biomechanics and to anticipate difficulties prior to surgery. In many cases it is found unnecessary by many surgeons.

However, unless it is done systematically, it might be difficult, even for the experienced hip surgeon, to detect those hips which will definitely benefit from a proper anatomical and mechanical pre-operative assessment. These cases, unless properly templated, are at risk to suffer inadequate biomechanics and higher complication rates (limping, dislocation, trochanteric pain). Nowadays, it is mandatory to focus on restoring hip biomechanics. A systematic approach to hip arthroplasty templating is a first step in the right direction. Reproducing the templated situation combined with a proper surgical implantation technique and respect for the soft tissues should result in better long-term outcome and patient satisfaction.