Orthopedic Implants Materials: What Nobody Told you About it

Orthopedic implants materials may have an important role in the fixation process. The choice of the implant material influences rigidity, corrosion, biocompatibility, and tissue receptivity, while its surface morphology affects its stability within the skeleton or the surrounding cement mantle.

What is the ideal orthopedic implant material?

The ideal implant material for orthopedics could be described as having the following characteristics:

Orthopedic implant manufacturers are constantly investing in R&D to improve existing materials and explore new ones to get closer to this description. The search is on…

There are 3 categories of materials currently used in prosthetic devices: 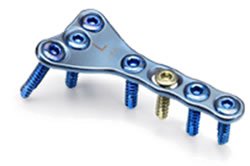 Stainless steel is used for non-permanent implants, such as internal fixation devices, because of its poor fatigue strength and liability to undergo plastic deformation.
Before the use of titanium, cobalt-based alloys had largely replaced stainless steel as materials for permanent implants. These alloys are generally more corrosion resistant, owing to the formation of a durable chromium oxide surface layer. Despite the good corrosion resistance, ion release in vivo is a major concern, as chromium, nickel, and cobalt are known carcinogens. 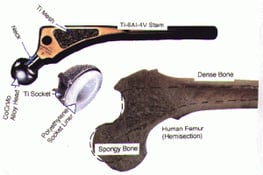 Titanium used in orthopedic implants involves pure commercial titanium and titanium alloys, such as Ti-6Al-4V, for example. These metals have been demonstrated to be highly biocompatible. Nevertheless, some concern remains as to the effect of vanadium and aluminum. Titanium and its alloys are more corrosion resistant than Co-Cr alloys because of the formation of titanium oxide on the surface. This layer, however, may be porous and rather friable. Abrasion of this titanium oxide layer can lead to the release of particles into the surrounding tissues. Although titanium implants have been considered to be the most biocompatible, these debris particles may well cause an undesirable tissue response with eventual long-term aseptic loosening of the implant.

Polymers are formed by linking a large number of monomers through chemical reactions. Inorganic polymers, the monomer is an organic molecule with a central carbon atom. 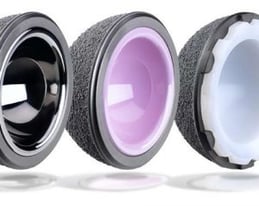 The most used polymer, in orthopedics, is ultra-high-molecular-weight polyethylene (UHMWP) or high-density polyethylene (HDP). Thus far polyethylene is the best material for articulating with metal or ceramic.

One major problem in polymers is the slow, temperature-dependent, deformation it suffers under load, commonly called “creep“. Another concern with polyethylene is the progressive wear.

Carbon fiber has been used for reinforcement of the mechanical strength of polyethylene. Although creep and tensile strength could be improved, resistance to surface wear was decreased.

Despite the increasing implantation of cement-less devices, the use of self-curing bone cement, which is an acrylic polymer, remains widespread. Modern cementing techniques are responsible for the much improved clinical outcome of cemented prosthetic implants. It should however be emphasized that cement does not act as a glue, but merely as a filler that allows mechanical anchoring of the implant and transfer of load from the prosthesis to the bone. Compared to cortical bone, polymethylmethacrylate (PMMA) is relatively weak concerning nearly all mechanical properties. Its low modulus of elasticity appears to be an advantage in that it allows a gradual transfer of stress to the bone.

The ceramics used in orthopedic implants include aluminum oxide and calcium phosphates. These ceramic materials are very resistant to compression but weak under tension and shear, and brittle.

Aluminum oxide (Alumina) ceramics are formed by the simultaneous application of pressure and temperature to a powder. This process, called hot-pressing, leads to a final product with high density, small grain size, and good mechanical properties.

Ceramics have a high modulus compared to bone (330.000 MPa). This may result in fracture of a bone or early loosening of ceramic acetabular sockets because of the high noncompliant elastic modulus.

Although in vitro tests revealed excellent results as to tribology and wear for the combination of alumina-to-alumina (head and socket), unacceptable wear after some years of clinical use has been observed. Another reason for the discontinuation of its use is the low resilience of this ceramic. This property may adversely influence impact crack initiation and propagation. Instead, ceramic to HDP articulating surfaces are being used.

Calcium phosphate ceramics are particularly attractive as implant coatings because of their high biocompatibility and reactivity. Titanium and titanium alloys are coated with hydroxyapatite (HA) using several methods. These calcium phosphate implant coatings have been shown to result in strong early porous implant fixation and early bone ingrowth.

Other ceramic materials are commonly used, such as zirconium oxide (Zirconia) and silicon oxide (Silica).