Rapid Prototyping and STL Files: Why They Matter in Orthopedic Surgery?

STL (STereoLithography) is a file format native to the stereolithography computer-aided design (CAD) software created by 3D Systems. This file format is supported by many software packages, being widely used for rapid prototyping, 3D printing and computer-aided manufacturing (CAM). STL files describe the surface geometry of a 3D object without any representation of color, texture or other common CAD model attributes.

Stereolithography machines are 3D printers that can build any volume shape as a series of slices. Ultimately these machines require a series of closed 2D contours that are filled in with solidified material as the layers are fused together. Rapid prototyping is a manufacturing technology used in many industries to develop high fidelity three-dimensional structures from source image data. Medical applications have generally been within an academic centre or research environment, as support costs have been large. Rapid prototyping is applicable to orthopedic problems involving three dimensions, particularly fractures, deformities and reconstructions. In the past, rapid prototyping has been hampered by cost and difficulties accessing the appropriate expertise. Today, the expense associated with the technique are highly mitigated, allowing surgeons to produce precise models for preoperative planning and procedure rehearsal.

The idea of using computed tomography (CT) data to build physical models was put forward by Alberti in 1979. A polystyrene model of a pelvis was constructed so that a custom-made metal implant could be designed for a patient with fibrosarcoma. In the 80’s, there was considerable progress in model building from CT data using polystyrene and then the stronger polyurethane foam; milled models were, already then, quite accurate for larger structures. By mid 80’s, 3D imaging had progressed to a level at which image fidelity was sufficient for more widespread clinical use at academic centres to plan for complex surgery, especially using computed tomography (CT) of the craniofacial and maxillofacial regions.

There are several rapid prototyping techniques:

> Milling is a subtractive technology, in which a foam block is successively trimmed away to produce the model;

Using computer software to produce 3D reconstructions and to calculate volumes has been useful in many specialties in medicine. Rapid prototyping can be used as an auxiliary tool for diagnosis and development of complex surgical procedures, as it helps visualize anatomical structures… Surgeons frequently must perform delicate surgery without the undeniable benefit of a firsthand look at what they will be operating on.

Several reports comment on the difficulties with this technique, particularly access to software. Most of the software used to be inaccessible to the non-radiologist, being bundled with the hardware used to produce the scans. Some non-CT-scanner-based software has been developed to try an overcome this problem. The majority of literature regarding rapid prototyping in surgery focuses on its uses within the maxillofacial specialty. 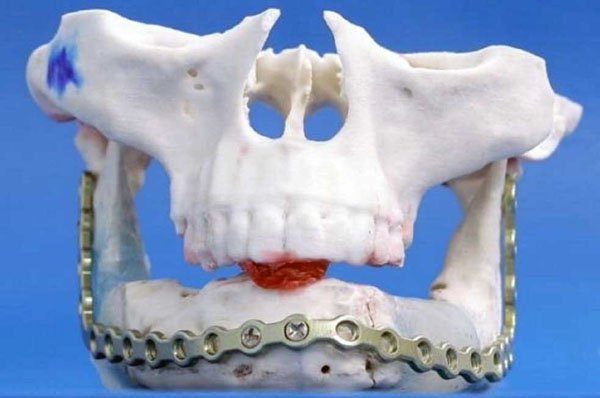 Although  this technology is not yet commonly used by surgeons, there is a fast growing body of work concerning innovative uses within orthopedics and trauma surgery, for example, for pre-operative planning, particularly in spinal surgery where placement of screws requires extreme accuracy.

Explaining the surgical procedure to the patient

Surgical planning is as valuable for patient communication. The use of a model to explain the execution of the surgical procedure is clearly a way to assure an effective communication with the patient, so he can understand what will be executed, reducing uncertainty and anxiety towards the operation.