As a surgeon, your diagnosis on a patient’s injury must be always a high focus procedure. When it comes to sports, this procedure needs to be more careful than ever. It may dictate the end of an athlete’s career.

Sports that require a lot of physical contact are the ones that are most likely to send their athletes to your office. It takes a lot for someone to be submitted to a surgery, but when it happens the injury is associated to some serious problems, like a replacement or reconstruction of the bone or ligament. In this article, we will go through some cases from Portuguese athletes who may help you to understand the procedures that took over their injuries.

As you know, the knee is the largest joint on human body and for its record the most complex. The knee ligament connects the thighbones to the lower leg bones. The knee joint relies on its ligaments and surrounding muscles to maintain stability and it’s easy to get injured. Any direct contact with the knee or a hard muscle and the athlete can get himself in a situation that it’s not the most pleasant. 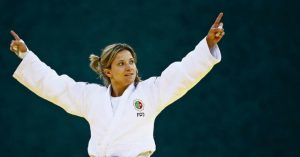 After the surgery she had to stop training for three months and rest the knee. This took away months of study about the opponent competitors and ways to improve her skillset for the immense competition ahead, something that didn’t stop her from winning the bronze’s medal at the 2016 Olympics.

Cristiano Ronaldo, the 2016 Euro’s hero. Went to 2016 European Football Competition with one goal: win it. As a matter of fact, he did it but he also won a really bad injury on medial collateral ligament. 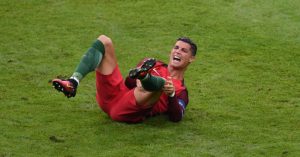 Ronaldo did not need any type of surgery since he did not completely tear his ligament apart. It means that the athlete was able to walk but running and playing football was tough because the activity was depending on the completion of turns on the affected knee.

When the lesions are isolated and/or partial, it will be possible to make conservative treatment.

Hyperbaric medicine was one of many treatments that Ronaldo has experienced. A type of treatment that involves breathing pure oxygen in a room or tube. On this therapy the air pressure is increased to three times higher than normal air pressure, which allows the lungs to gather more oxygen than would be possible at the normal air pressure. The blood carries the oxygen through the body and it helps to fight the bacteria and simulate the released of substances called growth factors and stem cells, which promotes healing. This worked out well on his recover since he needed to come back to work as soon as possible. 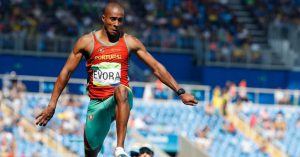 Back to 2012, Nelson Évora, a Portuguese triple jump athlete, did not attend the London Summer Olympics caused by a tibia fracture. As you know, the tibia can break in several ways and the severity of the fracture depends on the amount of force, which in this case only caused a stress fracture. It happens when there is an overuse of a previous fracture. He had to stop for three months. Muscles were fatigued and unable to absorb added shock. A fatigued muscle stresses the bone which causes a tiny crack, known as stress fracture.

Everything seemed going well, until two years later, Nelson had to stop again. This time, to get himself into an arthroscopy. An arthroscopy is a surgery which is used to treat problems in the knee joint. During the procedure, you need to insert a tiny camera, called arthroscope, which allows to guide themselves inside the joint, watching the whole process on a screen. This allows you to see what is the best solution for the patient, inside of the joint and using small instruments within the arthroscope to proceed with the surgery.

There are specific risks to a knee arthroscopy, such as:

For most of the people, this surgery takes an hour or two and they are allowed to go home on the same day of the surgery. At home, the person needs to have someone to look over them. With the proper care, the outlook after this surgery is excellent.

These three examples, were re-visited in order to show you, some of the procedures that allows surgeons like you, to treat the athletes the best way possible.

There is an available software where you can plan the operation for this type of situations and it is PeekMed. This software was already used on Danny’s, the Portuguese football player at Zenit St. Petersburg who suffered an ACL surgical repair, one of the most common knee injuries. The surgery was a success and according to prof. Carlos Noronha (Clinic Director at Performance and Health Unit of Portuguese Football Federation) “(…)The software has provided us important information with a precision only possible thanks to a 3D technology, thus making the whole procedure more predictable.”.

PeekMed helps you planning the surgery using either X-Rays, CT scans or MRIs for any procedure type. Using a CT scan or an MRI you can do it in 3D and visualize the problem from multiple angles in a couple of minutes. PeekMed has several automated processes to ease and accelerate the planning workflow.

It is a game changer for the orthopedics and traumatology fields and it is happening now.