Double Osteotomy of the Knee: The Right Decision

Osteotomy around the knee is a recognized procedure for knee pain that arises from an overloaded compartment of the knee due to metaphyseal bone deformity of the tibia or the femur.

The most common of these procedures is a High Tibial Osteotomy (HTO) for varus deformities or a Distal Femur Osteotomy (DFO) for valgus deformities although it has been increasingly recognized the importance of proper analyzing each case to address the deformity on the right bone every time.

In some complex cases, when a single level osteotomy above or below the joint will not adequately address the deformity, we may need a combination of both procedures (HTO and DFO) to solve the problem – a double level osteotomy (DLO), in order to realign the bones on either side of the knee joint. Usually, titanium plates are used to securely fix the osteotomy until bone healing occurs.

So, let’s put this in perspective, and show you a clinical case.

A 61-year-old man, non-smoker nor diabetic, with a previous proximal tibial trauma, presents to a clinic with crippling medial knee pain that makes him incapable of walking for more than 100 meters. He had marked knee varus deformity but preserved range of motion.

After the X-Ray analyses (figure 1), the orthopedic surgeon thinks about a high tibial osteotomy but refers the patient to another clinic for a second opinion, because he is not familiar with such big deformities and is afraid that the tibial osteotomy opening may be exaggerated. 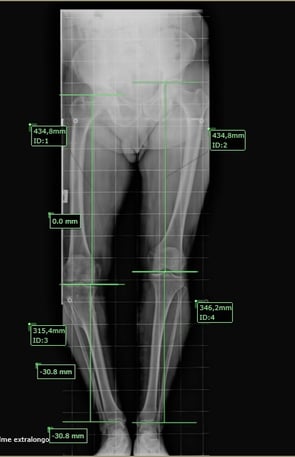 In another clinic, after case discussing with colleagues and the patient the indication for surgery is confirmed.

PeekMed is a powerful 2D/3D pre-operative planning system for orthopedic surgery that uses Artificial Intelligence technology to facilitate and support the planning and decision-making process before surgery. In this scenario, PeekMed Automatic Knee Osteotomy Planning Tool successfully identified both deformities and suggested the proper procedure for this patient: a double level osteotomy instead of an isolated HTO as initially proposed. (Figure 3)

It is really important to make decisions based on good information and with the support of the most appropriate tools. In this case, PeekMed helped to make the right decision.

Are you curious about how the double osteotomy was planned with PeekMed? We show you everything in the following video: 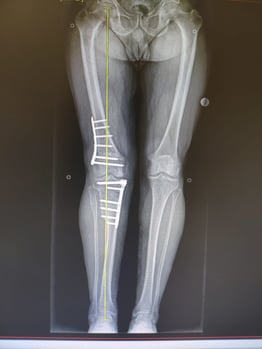 The problem (even if complex) was solved properly and the patient is pain free and satisfied with the clinical result (Figure 6).

And PeekMed is grateful for helping to achieve the best outcome of this and thousands of other knee osteotomy cases around the world.